To our UTMB School of Nursing class of 2020,

Alongside our colleagues throughout UTMB Health, we are closely monitoring developments with the novel coronavirus COVID-19 and making the best decisions based on current knowledge. Due to the need for social distancing to help control the spread of this virus, we have made the decision to postpone our Commencement ceremony.

Like you, we have been looking forward to this special occasion, but we must prioritize the health and safety of our students and their families, our faculty, staff and the community. The new plans for Commencement have not yet been determined, but we will communicate those to you as early as possible.

We are so proud of your achievements and look forward to celebrating your graduation. Please monitor the SON website (nursing.utmb.edu) for further communications as they develop. 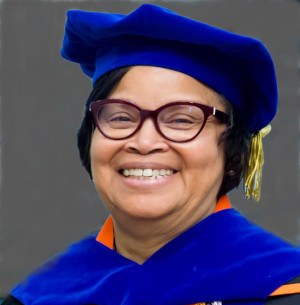 Dr. Ernestine "Tina" Cuellar is a 1967 graduate of Norfolk State University, an historically black university located in Norfolk, Virginia. After graduating with an Associate's degree in Nursing, she went on to pass the registered nurse state board exam (precursor to NCLEX) at the age of 20.

Following her husband in his naval career, she practiced nursing in Virginia, Florida, and Texas. She worked in several nursing specialty areas including medical, obstetrics and mental health. It was during this time that she developed an affinity for mental health services.

Upon graduating from UTHSC, she was commissioned a Captain in the United States Air Force Reserves Nurse Corps and served in Germany, Saudi Arabia, and Iraq.

During her time in the reserves, she and a colleague are credited with developing a multidisciplinary mental health training course for mental health technicians, nurses, social workers, and psychologists.

She was a faculty member with the UTMB School of Nursing and later served as an Associate Dean for the school before retiring in 2013.

Questions about the ceremony? Check out our

Students and guests are offered a special nightly rate of $189 for Thursday, April 23, 2020, through Saturday, April 25, 2029. Contact the reservations department by April 2, 2020 and specify the UTMB School of Nursing Commencement.

Register for membership to the SON Alumni Association. Get connected, network and share professional news, learn about employment opportunities and watch for upcoming events!

Connect with other nurses, build your network, advance your career and search for education opportunities with this online networking tool for nursing professionals.

Please use the following link to order your Commencement regalia and/or UTMB announcements: https://buildagrad.com/utmbson

Please visit the Campus Store or use the following link to order a diploma frame: https://utmbstore.com

Please use the following link and directions to order your SON pin by January 31, 2020 at 5:30 PM CST: http://www.jbrandt.com

After ordering, you will receive a confirmation email to your email address you used when you logged in. If you do not receive this confirmation OR you make a mistake on your order, do not reorder but rather call Alicia Brandt at 817-877-0513 x304.

Please remember that your pin will ship to the Bookstore in time for your graduation. It will only ship to your home if you do not attend Commencement and select that option when ordering your pin, and you must call the Bookstore at 409-772-1939 to pay the $12.99 shipping fee.

UTMB strives to maintain an environment free from discrimination against individuals on the basis of race, color, national origin, sex, age, religion, disability, sexual orientation, gender identity or expression, genetic information, or veteran status. UTMB is committed to equal opportunity for students with disabilities. If you have a documented disability or would like to obtain information regarding services for students with disabilities at UTMB, please contact the Institutional ADA Officer in the Lee Hage Jamail Student Center, Suite 2.118 or at (409) 747-4818.

UTMB continually works to foster community among student veterans, honor their military service and academic contributions, and connect students to various resources, services and programs. Certifying Officials provide guidance on policies and procedures of using veteran education benefits as well as certifications for federal and state benefits. Accommodations, counseling and program specific tutoring is available to students when needed and UTMB has a Veterans Resource Group whose mission is to promote an inclusive university environment for military veterans.

Already know who you are looking for?

NOTE: Some departments should be contacted by email for prompt assistance.

(Tap to call or email)